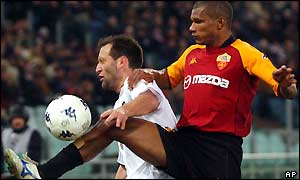 Reviewing the signings thus far in the transfer period, Red Bull New York and San Jose have been the big players. Juan Carlos Osorio has acquired several players most notably Venezuelan national team fixture Jorge Rojas. San Jose has acquired two big names in Francisco Lima who is now 37 but whose record speaks for itself and Darren Huckerby whose profile has been discussed regularly on this site and on the American Soccer Show.

Chicago obviously made the biggest move of the summer by acquiring Brian McBride. However, McBride will be available in mid August at the earliest for his hometown club and as it stands now the Fire by giving up Chad Barrett with Calen Carr injured will be forced to rely on Thomasz Frankowski for scoring. Ouch!

Toronto FC desperate for attacking options has apparently acquired Barrett from Chicago and is negotiating with Paul Dickov the former Scottish national team and Manchester City forward. TFC was this past week eliminated from the Canadian Championship by the Montreal Impact thanks to Roberto Brown, a player that TFC would have been wise to consider signing a year ago when he was waived by the Rapids.

Houston is the two time defending champion and one of only two MLS team remaining in Superliga. That has not stopped the Dynamo from dumping disappointing Franco Carracio and signing Nate Jaqua while acquiring Kei Kamara from San Jose. Kamara however will be unavailable when World Cup qualifying resumes as he has become a fixture this past month on the Sierre Leone national team. Kansas City brought Josh Wolff back to MLS and he scored on his debut last week in Columbus.

The one team who needs desperate help that has made little movement thus far is FC Dallas. With the possibility of losing Juan Toja and Kenny Cooper in the near term, what are the Hoops long term plans and ambitions?

What are everyone’s thoughts on the winner and losers thus far in the transfer market?

4 Responses to MLS Transfers: Winners, Losers and Your Thoughts.