Will MLS once again fail in Miami?

Posted on December 9, 2008 by Kartik Krishnaiyer 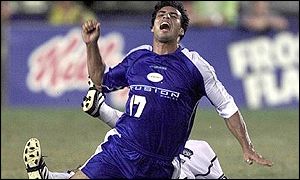 The Miami Fusion was contracted after the 2001 MLS season. Since that time south Florida football fans, myself included have been eager to see the league return to the area. In October, FC Barcelona in partnership with local businessman Marcelo Claure announced their intention to bring the MLS back to South Florida. Claure is the founder of Brightstar and the owner of FC Bolivar in Bolivia. As of this writing Miami is the clear front runner to be awarded one of the two new expansion franchises by the league. Also in the running are St Louis, Portland, Vancouver, Atlanta, Las Vegas and Ottawa.

The regions football fans are very sophisticated and numerous. That is part of the reason MLS failed before and could fail again. South Florida is the area in the nation with the most football fans outside of New York and Los Angeles. The television ratings and local media coverage of the sport are impressive by any standard. Yet none of this translated into success for the Miami Fusion from 1998 to 2000. MLS was seen by the ethnic fans of all persuasions in the region as an inferior and overly Americanized product. In 2001, the Fusion began to turn things around and had a huge upsurge in fan support and attendance.

Football should not struggle the way other sports do in south Florida if done right. But “doing it right” is not necessarily in the hands of Barcelona or Claure. If MLS treats the Miami market the way it has previously of in a typical American sporting way, the results could once again be disastrous. The whole landscape of MLS and Miami is littered with pitfalls that cannot simply be ignored.

The new club would play at Florida International University (FIU), about 35 miles southwest of Lockhart Stadium, where the Miami Fusion played. This location could make it difficult for fans of the previous Fusion franchise to attend matches. In addition, FIU is substantially west of Downtown Miami and south of the metropolitan area’s population center. Being pinned down at FIU also means for the foreseeable future the new team will not have a full football academy/practice facility which is now becoming the norm in MLS. The Home Depot Center began a trend of MLS clubs not only building soccer specific stadiums, but also youth academies, training pitches, and other facilities.

South Florida is an infamously fickle sporting culture. While the NFL’s Miami Dolphins and the University of Miami’s American football team enjoy consistent local support in the form of TV ratings, merchandise sales but necessarily attendance, the other sports teams both college and professional in the area do not. Not only do the Florida Marlins, Miami Heat and Florida Panthers struggle to maintain consistent fan interest but they often play in front of half empty crowds. The University of Miami’s local popularity in American football does not extend to Basketball or Baseball where even in successful seasons; small facilities for those sports are half full. Florida International University the proposed home of the new MLS team, and Florida Atlantic University (FAU) who plays at Lockhart Stadium, the former home of the Fusion usually are fortunate to draw a decent crowd for American football. FAU has received post season bowl bids two consecutive seasons, yet continues to not only play in front of a half empty stadium, but they struggle for more than a mere mention in the local newspapers.

When the Fusion finally turned the corner in 2001, the majority of the new fans were from Palm Beach and Broward counties, areas that are far less accessible to FIU than Lockhart Stadium. So in other words, the new club would have to start over in building a fan base, with little residual affect from the Fusion days. The rebuilding of the MLS brand locally can only be accomplished if the product is considered presentable to the football loving masses. South Floridians understand football in a way most Americans do not. While this may sound positive, it is a big part of the reason MLS failed here previously. Unlike other American cities that struggle with football/soccer, because of competition from other sports and lack of understanding of the game, Miami struggled with MLS because the product was inferior to what the vast majority of ethnic fans deemed acceptable.

14 Responses to Will MLS once again fail in Miami?