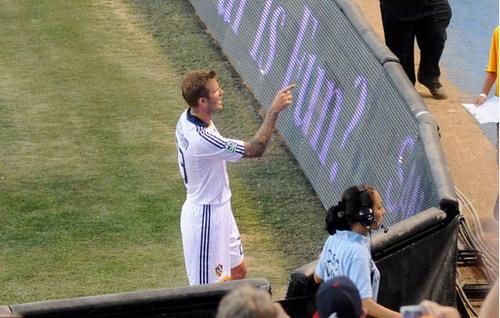 This week President Obama invited both parties involved in the Cambridge Police department incident to the White House for beers.  He is trying to turn an unfortunate event into a learning experience.  It may take some cooling off time to pull this off and get both parties to agree to a date and time, but it appears there may be a better ending to the affair than expected.

David Beckham may want to take a cue from President Obama with regard to the ‘fan’ from the AC Milan friendly.  When the season is over, he may need to invite him out for some beers.

When Beckham grew bitter and challenged the ‘fan’ to come out of the stands, he showed a side of himself that the American public had never seen.  He says he doesn’t regret his behavior, but it’s his stubborn bravado talking.  He knows he was wrong by being confrontational with a fan.

Ironically, that whole halftime scene might have been exactly what he needed.  It seemed to light a fuse in him and give him more purpose.

David Beckham needs to win a championship this year with the Galaxy for many reasons.  Number one, his reputation is on the line and he needs to qwell his critics.  Number two, he wants to play on his schedule, which means going to AC Milan next year, playing the World Cup and coming back to the Galaxy mid-season.  Number three, it puts Beckham on target for his biggest undertaking, making U.S. pro Soccer a more popular spectator sport.

A championship resolves all his conflicts.

Winning this year with America’s biggest Soccer idol, Landon Donovan, won’t secure Soccer’s plight in the U.S., but a second, third and fourth championship may.

David Beckham and the L.A. Galaxy need to become a dynasty to improve Soccer’s chances of going mainstream and never looking back.  Beckham knows this and he also knows that he has got his Scottie Pippen in Landon.  A dynasty can only begin with the first championship.

The ‘fan’ did him a favor and has forced Beckham to keep focused on his desire to bring Soccer to the next level in the U.S.  When they do have beers, hopefully for Beckham and for pro Soccer in the U.S., it is after a championship and Alexi Lalas is there for the toast.