Galaxy look to continue dream season against the Dynamo 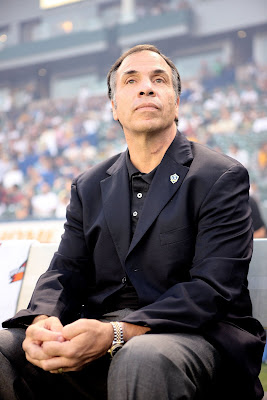 The Los Angeles Galaxy began the 2009 season at best as a team in transition, at worst as a team in turmoil. Despite initial problems, the Galaxy now stands only one game from winning the Western Conference. After dispatching city rival Chivas USA in what could only be called the “Battle of Los Angeles”, the LA Galaxy turn their attention to the next task at hand on the road to MLS Cup 2009 – the Western Conference Final against the Houston Dynamo (Friday, 8PM PST – ESPN2).  After a three season absence, “The Flagship Club of MLS” is  one match away from playing for the MLS Cup for an unprecedented sixth time. Before this dream can become a reality, the Galaxy must take on an experienced Dynamo side that is playing in their third conference final in four years.

Los Angeles won the season series with Texas based club (1-0-1) winning at Home Depot Center, 1-0 on June 29th, which snapped La Naranja’s team record 11 game unbeaten streak.  Following the victory over then top of the table Houston, the Galaxy began their transformation from also rans – 2-3-9 before the match against the Dynamo – to the top club in the Western Conference with a 10-3-3 tally after the win. This dramatic turn around can be attributed to the influence of newly named Coach of the Year Bruce Arena, who instituted a personnel change such as  the addition of  former US international defender Gregg Berhalter, who brought in a winning mentality into the team as well as a wealth of experience for the Galaxy’s myriad of young defenders.

“The attitude is better (under Arena), you always hear the team buying in to the coaching philosophy and that is exactly what we have done here. I can’t remember a time this year that a player has stepped up to management due to a lack of playing time. We all respect the decisions of Bruce (Arena) and Dave (Strachan) and are ready when called upon,” said forward Landon Donovan in a recent teleconference.

The improved chemistry in the locker room can only serve to help the Galaxy in what is sure to be a contentious 90 minutes.  The last match these two played against one another was a heated affair that saw Brian Ching sent off after a ruckus caused by a challenge on Ricardo Clark by midfielder David Beckham.  Over the two legs of the regular season series between the teams there were a total of 9 yellow cards as well as the one red card issued for violent conduct to the Houston forward.

One of the major impediments to Galaxy’s progress will be Brian Ching, who scored the series winning goal against the Seattle Sounders in the first overtime on Sunday, putting the Dynamo in the West Final. The captain of the Houston Dynamo has enjoyed a very successful season picking up several honors including the Dynamo’s Golden Boot for leading the team in goals scored with eight. Despite the danger that he poses, Ching is a familiar entity for Arena, who coached the Hawaiian forward during much of his career with the United States Men’s National Team.

“He’s a complete goal scorer and requires complete concentration from your back line. Brian is a true goal scorer, he can be hiding for certain segments of games but when he has an opportunity to jump on a chance, he’s there as we saw last game against Seattle. Overall,  He’s a proven goal scorer in big games and we have to be really focused on the challenge of dealing Brian on Friday night,” said the 2009 MLS Coach of the Year.

Ultimately because of their improved chemistry and cohesion on the field, Los Angeles is on the brink of their sixth appearance in the MLS Cup Final.