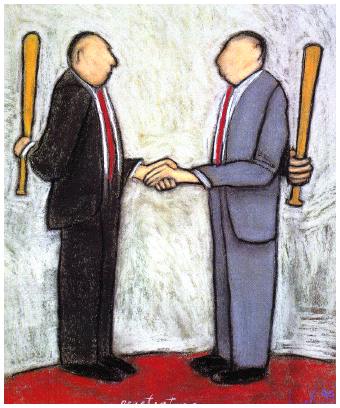 The MLS season opener is 24 days away, and as of right now, it’s going ahead as scheduled.

Of course, the “as of right now” part of that sentence is key.

The collective bargaining agreement expired last month and it’s hard to envision a scenario in which two sides are farther apart than the league and players union are in this case.

The issues are many, but it boils down to four words:

Players want free agency and the league would rather listen to Joan Rivers read War and Peace.

The latest on-record comments from both sides are hardly cause for unbridled optimism.

When Thursday’s deadline for a deal came and went, the league released this statement:

“We have listened to the issues raised by the MLS Players Union and the League has made detailed proposals that have addressed these issues, including in the areas of economics, guaranteed contracts, options and the ability of a player to move to another MLS Club if he is released by his current Club.

“These proposals, which represent substantial changes from the current CBA, will significantly increase our spending and provide substantially more rights to the players.”

What that means is, “look, we’ll give you some more money and maybe hold fewer players hostage in between contracts, but that free agency thing? Forget it.”

The players union crafted a statement of their own:

“There simply hasn’t been enough progress made in the negotiations to date to warrant an extension of the old agreement.”

“We have advised our players to keep working for the time being, but as of Friday they will be doing so without a CBA. In the meantime, all options are being considered as the process continues. We are completely committed to forging real changes to the way MLS players are treated.”

That’s code for “yeah, thanks for the crumbs. How about a slice of bread this time? And no, we’re not quite ready to strike yet. But we’re thinking about it.”

As usual with sports labor disputes, there will be no winners if there is a disruption in the league schedule.

Owners may have more money than the players, but their investment in MLS is also far greater. No one wearing a suit would be happy if the league isn’t playing games later this month.

Of course, fans would be the biggest losers of all. Caught in the middle while two groups argue over money and principles.

It’s hard to pick a side, really.

Both have valid points.

There is common ground, however, should they choose to recognize it.

It is simply this:

A prolonged work stoppage could relegate Major League Soccer to history, much like the North American Soccer League.

No labor dispute is worth that.