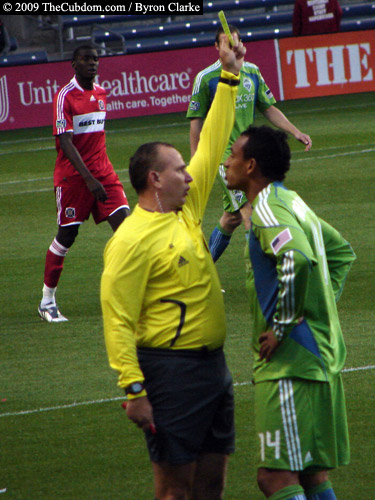 Whenever we write our reports on a league or a National Team match, the number one thing we don’t want to make any mention of is the performance of the referee. Yet no matter how much we try not to write about it, there will be those times where the officiating sticks out like a sore thumb. And I also don’t want to beat the proverbial dead horse, but in the case of Sunday’s match, the error made needs to be clearly dissected so that future instances don’t occur. .

The moment that is still floating around is the strange call by Referee Jasen Anno who officiated the New York Red Bulls home match against the Portland Timbers. The play where you would think reporters would love to write about the first goal of Tim Cahill’s MLS career is still a question mark.

But once again we have to discuss why this call was made and what could’ve been in the mind of Anno when he made a mess of things for the Timbers. Portland led by a goal as the match clock ticked to the final minute of regulation in the first half, and Thierry Henry found a way to keep possession at the end line and gave the ball to Sebastien LeToux.

A quick cross inside the area to Cahill who collected it and laid the ball off to Dax McCarty who one timed the shot on goal. The shot was handled by Timbers central defender David Horst off his right arm. The hard shot rebounded back to Cahill, who tagged the ball into the back of the net for the tally.

But just after Cahill shot the ball, Anno blew his whistle and ran into the area as if he was going to award a penalty. Yet just seconds later you see Anno running towards the center circle and waving his finger in a gesture of “no, no, no,” and allowing the goal.

On the MSG+ coverage Steve Cangelosi called the equalizing goal and said this: “But it will not count. Will it? Now the celebration is on, where is the confusion here?” If you go to Youtube and find that same goal with the Timbers announcers calling that play Robbie Earle was not happy with the decision. “The referee can’t do that he has to give a penalty. He blew his whistle as he was going to give a penalty and now he’s allowed the goal.”

So we can all agree that something is amiss here when you have announcers either not sure of what’s happened, or questioning the referee’s abilities to call a match?

But the one thing I found quite interesting is on the website of FIFA where they have a link to “Laws of the Game.” Section 5 is the Referee and Part 3 called “Decisions of the Referee.” It states: “The decisions of the referee regarding facts connected with play, including whether or not a goal is scored and the result of the match, are final.”

The referee may only change a decision on realizing that it is incorrect or, at his discretion, on the advice of an assistant referee or the fourth official, provided that he has not restarted play or terminated the match. But this was not the case, as Anno indicated after the match. He claimed this was a penalty, and that advantage was played to award the goal. Let’s take a look at that assertion.

While there is no specific guidance about advantage played on a penalty within, “The Interpretation of the Laws Of The Game And Guidelines For Referees,” there are a couple of interesting tidbits that would lead one to think Anno acted inapproprately.

1) The document strongly recommends the guarded use of the whistle, in order to maintain its effectiveness. No whistle needs to be used in the case of a goal award, but a whistle is definitely needed to halt play for a penalty. Basically, the idea is that a whistle indicates a need for the immediate and hasty halt to play.

2) A whistle being blown from the crowd that causes a team to pick up or handle the ball intentionally (basically simulating the stoppage of play) should result in a drop ball situation.

In other words, the whistle is an unmistakable indication of a dead ball situation while play is live, and thus a blown whistle should cause players to stop when play is active. For any advantage to be played after a whistle is blown would appear to be a major mistake by the referee, no matter how little time elapsed between the sound of the whistle and the ball entering the goal.

There needs to be a clear directive from the governing bodies that this was clearly a botched play. In no case should advantage play continue after a whistle is sounded. What transpired at Red Bull Arena is very simple. The referee acted to call for a penalty in the area of the Timbers as the defender handled the ball. Tim Cahill’s goal should’ve been wiped off the board and a spot kick to the Red Bulls should have been awarded. Jasen Anno failed to act on his first decision, and it may have had a serious impact on the outcome of Sunday’s match.